Erin is a 17 year veteran dance team coach in Minnesota. A 3 time MADT coach of the year (2009, 2010, 2014) and winner of 2 state championships in high kick with the Cannon Falls Bomber Dance Team. In high school Erin danced for Winona and Apple Valley high schools. Erin is a nationally known blogger, writing for the Radio City Rockettes and a Hollywood movie among other projects. Erin also teaches on a freelance contractor basis for many MN high school teams and can be contacted for date/time availability at mnhsdanceteam@gmail.com

Duluth East Dance Team member Rachel Sandell loses her battle with liver cancer, but her memory will dance on

MNHS Dance Team Online is sad to announce the passing of Duluth East Dance Team graduate, Rachel Sandell.  Rachel was a beloved member of her community and the East Side Steppers who lost her battle with liver cancer on Sunday, October 16th 2011.  Many in the high school sports community know and remember Rachel after the touching tribute for her at the MSHSL boys hockey tournament in the spring of 2011; where the students section for East carried blue “Love for Rachel” signs and chanted her name.

Rachel began her journey with cancer around Easter of 2010, when she had surgery to remove part of her liver.  Coach of the Duluth East dance team, Jeannine Maki said this about her:  “Everything seemed to run smoothly for her, and they got the best results they could of for that surgery. She ended up with a ten inch scar across her abdomen, but that didn’t bother Rachel one bit!“  Coach Maki went on to give the following statement about Rachel:

“I got to know Rachel going into her senior year 2011. I became the new head coach that year for Duluth East Dance Team transferring from Duluth Marshall. Rachel was always the girl rooting for her teammates.  She never gave up, and when she couldn’t get a certain move, or it was hard for her – she never gave up.  Just like she never gave up on fighting cancer. Her previous years she had always been on JV, well her senior year, and my first year I put her on Varsity Kick…. She was sooo excited to be able to be on varsity, and us coaches were excited for her too.  In her dance team senior letter her greatest experience was being able to dance high kick at sections.  She came with us as an alternate to varsity jazz state, and was a huge support for the girls.  A week after state dance team 2011 Rachel went for more testing, and found out that the cancer had spread to her abdomen and a few spots on the lungs so she went and sought treatment at the U of M. Meanwhile in the beginning stages of March was the high school hockey tournament, in which Duluth East played, and Rachel was a total hockey fan!!! That is where the Love is on for Rachel blue signs became famous, along with Rachel. Rachel and her parents went to several hospitals in the country to get the treatment that she needed, and deserved, however in September of 2011, her last visit to the Dr’s, her option for treatment out weighted what her body would be able to take .So they stopped all treatment, and let Rachel live as long as she could. Oct 16th 2011, Rachel Sandell passed away.  A very sad day for the Duluth/ Dance/ Hockey Community. I feel very blessed that I was able to coach her for her Senior year, and to be able to just get to know her. She was always playing practical jokes on people, and making everyone laugh. God now has another dancing angel:)”

A memorial has been set up on Rachel’s caring bridge website, where there is also a guestbook.  You can find that at Caring Bridge.  Our deepest sympathies to the Sandell family, the East Dance Team, and all those touched by her story. 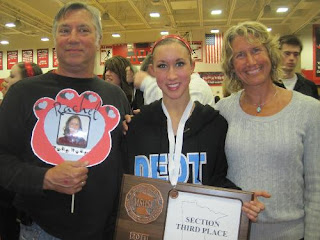 Interested in advertising on MNHSDanceTeam.com? Email mnhsdanceteam@gmail.com for our advertisers packet for 2019-20!