Erin is a 17 year veteran dance team coach in Minnesota. A 3 time MADT coach of the year (2009, 2010, 2014) and winner of 2 state championships in high kick with the Cannon Falls Bomber Dance Team. In high school Erin danced for Winona and Apple Valley high schools. Erin is a nationally known blogger, writing for the Radio City Rockettes and a Hollywood movie among other projects. Erin also teaches on a freelance contractor basis for many MN high school teams and can be contacted for date/time availability at mnhsdanceteam@gmail.com

While it might seem like peace and quiet in dance team world – there is a ton of planning and prep going on in the background this time of year.  I’ve already heard of a few uniforms for next year done and in the racks – so it’s time for everyone else to hop to it!  Today, we’re talking to Deborah Nelson over at Satin Stitches about ways to save money, and make that uniform investment work harder for you.  This example is one of my recent favorites – tons of wow! 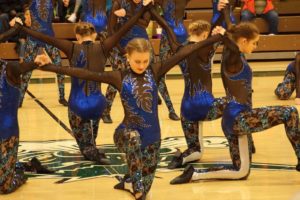 Teams are coming to grips with the new costume regulations that loosened up this last season. Many coaches have been hesitant to make changes, but should feel more confident, now that an entire season has been completed with these costume changes.

The results of these rule changes?

More stock catalog styles may be used – helping with team budgets. And if teams are still creating custom looks, the option of creating costumes without a zipper, because now modest keyholes (less labor intensive than stitching in zippers) are allowed will help with the budget as well.

But besides possible budgetary changes, what has changed, is that there are now more design options for Minnesota High School dance teams, placing them more in line with their counterparts in other states, where more nude (but not sheer-nude) sections have been allowed. Visually, allowing lined nude sections (nude-toned opaque fabrics) allows for more of an ‘opened up’ look versus that ‘tight to the neck’ look that has been the norm.

But, coaches seem to be somewhat gun-shy with this new styling avenue, after it was banned for so many years, in Minnesota. I expect we will see more this coming season.

Beyond the addition of more ‘nude’ options in costumes, themed costumes are still huge. Themed costuming can certainly enhance a dance performance, but teams should realize the ramifications for having costumes that may not be easily reused.

Ordering two new costumes every year can get pricey, even if teams go the least expensive route of ordering non-custom, catalog styles. Consider ordering one new costume every year, allowing to reuse it for a second season.

If you love to (and are successful at) fundraising – and your team can afford new costuming every season, buy smart – take advantage of Early Bird discounts offered in the spring (too late for this year, but consider for next spring), as dance team manufacturers are not at full capacity and are trying to spur ordering during the off-season.

Don’t rush to order a design that you haven’t thought out well, in advance. As with anything, haste can make waste. Money spent on a poor choice for a costume could be money wasted, rather than being a thrifty option.

Trends in dance team costuming include the continued use of lots of lace, mesh and other sheers, with plenty of rhinestone embellishments. Asymmetrical designs are still popular and lyrical costuming includes lots of drapes and sashes. Soft, flowing skirts add dimension to jazz performances. Mixing different fabrics also adds dimension to a costume.

With kick costuming, there are still two different types of styles – the color blocking which adds visual interest to your routine without adding any increased talent. And the ‘new’ costuming that ignores this tried-and-true, iconic Minnesota kick style, by simply using a themed costume.

Themed costuming can enhance performances, but may only work for one season. At Satin Stitches, we have worked with several teams over the years, to design and create themed costuming that can be recycled with only minimal changes, to be suitable for a future themed look. This takes extra thought and planning, but could be very budget friendly, in the long run.

There are several levels of themed costumes. The simplest would be to create a costume that has the ‘essence’ of your theme. Some small details that connect the costume to the desired theme, such as ‘polka dots’ on part of a costume to suggest ‘clowns’. Or even an accessory such as a scarf or hat with polka dots, for example. The tie-in is with the music – the words or the style (a Kaliope for example).

The next level of themed costuming would have more details suggesting a theme, with let’s say…a giant bow tie and bright suspenders added to a costume. Or a belt or vest of bright, oversized dots or stripes.

The highest level of a themed costume would be a biketard with polka dot bodice, a 3-D skirt with bright colored banding, the big bow tie, clown hat and clown socks and shoes – a sort of ‘all in’ costume. You can imagine that this costume screams ‘clown’ but would be very difficult to use for another theme, such as garden fairies, for example.

With the first level of simple costume theme-enhancement, the basic costume could be used with different accessories or added details, to become a garden fairy costume.

And remember that for the majority of your audience AND judges, your costumes are seen from a distance, so large details are so much more important than small details. If you can’t really see a detail from 40 feet away, perhaps you don’t need to spend money on it. Painstakingly, specially placed rhinestones in an intricate pattern with a combination of sizes and colors, may be lovely up close, but not really appreciated from a distance – where a scattering of basic crystal rhinestones might result in the same effect, from the judge’s perch.

On paper, or in your head, an idea might seem totally doable, but in reality, it may not work at all, or may work too slowly or too awkwardly. I was thrilled to be able to see Crosby-Ironton’s dance team perform their transforming routine twice at Target Center. I knew what to watch for, but the team worked out the details seamlessly, presenting bright yellow wings ‘out of nowhere’. Many preliminary ideas were fielded between myself and our creative staff, along with ideas from the coach on how to make this work. We tried several variations before we hit on something that was then able to work smoothly.

So before you present a transforming idea to whomever is creating your dance team costume – be sure and spend some time brainstorming just how you envision it happening. Then it needs to be worked out in the real world, and then vetted so that your team can actually work with it.

Hopefully, this information will give you ideas to think about, for the upcoming 2016-2017 season! It’s only a few months down the road!

Interested in advertising on MNHSDanceTeam.com? Email mnhsdanceteam@gmail.com for our advertisers packet for 2019-20!